Beautiful Day for a Bitchy Rant

Here’s a little tip; something you may not know about me. A Pro-Mo tip, if you will. There’s no real reason why you should know this so don’t get all angsty for not knowing something, even though I’m totally appalled at your misstep. How can I count on you, faithful reader, to properly stalk me and compile a truly complete dossier on my extraordinarily exciting life if you have these gaping holes in your research? Huh? Shameful, really.

I’ll let you slide this time.

This little tidbit of info is difficult to admit to because of the stigma that surrounds it. I would like to preface this ‘reveal’ by saying, please don’t pigeonhole me by my admitting it. Just because I indulge in this activity doesn’t mean I’m one of them. I promise you, I’m not. Besides, there are functional research reasons for doing it. Kind of like social research to better understand the strange creatures…out there. Outside. You know, public. Ugh. Yuck.

Anyway, here it is: I watch daytime TV. I don’t just watch daytime TV but am quite religious about catching the 3pm “Dr. Phil “and then almost immediately taking a nap. I can’t help the nap part. Something about wanting to pretend it was all a dream or just being soothed by that holier-than-thou, sanctimonious Texas drawl that puts me to sleep.

Also, the other reason for watching is that Dr. Phil actually did do me a tremendous amount of good once.

There was a time that I was subjected to complete bullshit perpetuated by a mannish-looking whore who somehow slimed into my life for 15 years and then left it explosively, leaving a trail of sour-smelling drug store fragrance and half-decomposed roofie-puke. Upset and confused as to why I would allow someone like that to share my same existence instead of stomping on it like the slug she is, Dr. Phil talked me through it. Of course not me specifically but, during his self-congratulatory hour every day, he was able to convince me that there are people out there that just suck.

Very much unlike Oprah, Dr. Phil doesn’t ask that you, us, we accept that all people may have pasts that cause their evilness so therefore we must empathize with them. He admits that there are some people out there that just suck, who are truly evil, and to just get the fuck away from them. I like that. The “Oprahfication of America is over,” to quote another self-righteous, sanctimonious character.

(And if you can guess where that quote is from, message me. We can toss quotes to each other from all 20 seasons. I’m not ashamed to admit where it comes from. I’m just curious if anyone else can place it. )

I find this refreshing. Refreshing because there is something doubly injurious to take away the anger and resentment rightfully owed by justifying another’s evilness through their demons and I want that to stop. All this bypassing of responsibility is making my head spin.

–There’s a point here, I swear. Somewhere. Cut me some slack, my chick-ness demands that I talk in circles. I can hang with the dudes but I’m still a chick no matter how much better I can swear than they can.–

What was that point? Oh! Evilness.

A while ago, I met up with an old “friend”. She was a former BFF from middle school who is one of those evil people. Just like the man-whore who insinuated herself into my pristine adorable existence except meaner. Sure, she has a past and feelings that were maybe stepped on and because of that she could still be a festering, hopefully infected, sore from all of it, but…

Fuck her for taking it out on me.

As opposed to the slut, the depth of this canker sore’s evil is much deeper, more sinister, crueler, and, if it weren’t unleashed on me, somewhat admirable in its insidiousness.

Long story short, –yeah, yeah, yeah, shut up– having reached out to this festering boil to make amends over my completely erroneous impression that I, too, was somehow at fault for our falling out, she took it upon herself to inject her venom in me yet again, almost 30 years later. The conversation we had was over 2 years ago and I’m still pissed. I’m still angry about how she tried to make me feel and now even more pissed that I’m allowing her to rent out my head. You can’t learn that kind of evil skill, it’s born. It’s burst forth like some Bosch-style nightmare creature born out the ass of Satan trailing mung fish minions. 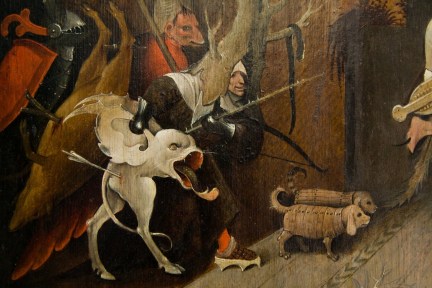 Not only did this diseased-freak-of-a-human imply that she, and other small people I had known, spent an unusually long period of time discussing the cruelties I had inflicted on them 30 years prior. Sitting around spewing fecal tales about me that were untrue and then had the audacity to tell me about it, it comes to my attention she lied about all of it.

Because of my lack of ingenuity, I guess, here it is 30 years later and I’m stupid enough to extend an olive branch so we can both go on about our lives without baggage. Yet she comes slithering in carrying a steam-trunk full of bile and vitriol, holding it out for me to take like a porter on the Titanic. I should’ve known even though I didn’t.

Back to Dr. Phil…

One of his go-to’s is this piece of advice that has served me well after the fact. He says, in essence, that as good people, we can’t anticipate or know how really evil people can hurt us, because, as good people, we can’t imagine it. It is beyond our capabilities as decent people to produce imaginations so indecent, much less act on them, that we can’t prepare. It’s like when people assume that getting murdered would be the worst thing that can happen to someone. It’s not. It’s so, very much, not. There are far worse things in this world people do to others that would make them beg for death. You don’t want to know what those things are, just assume you never want that kind of knowledge.

Knowing this about them, however, doesn’t make you better able to prepare yourself for that kind of evil. You can’t prepare against something you don’t know exists. You can steel yourself. You can move cautiously. You can decide to not assume a polite, politically-correct stance that flies in the face of intuitive caution regardless of how rude it may seem.

Because it’s better to offend someone when the other outcome is to bleed profusely out of a hole made in your neck by some hate-filled assfuck you crossed paths with, only because you didn’t want to seem rude, despite what your nagging intuition told you. Because being rude is not the worst thing out there.

Remembering that there are worse things out there, as Dr. Phil has suggested, may be the thing that keeps me in the future from getting too close to the evil I know not of. Being cautious and keeping my guard up could possibly save me from having to write another long-winded rant about some worthless piece-of-shit who insulted me just for fun two years later.

Don’t get me wrong. I’m not naive. I know that the scandalous, entirely-surgically-modified-except-for-the-huge-Adam’s-apple-that’s-not-fooing-anyone whore, and the waste-of-oxygen hate-filled throat-aerator, and even this last slimy Hell-baby who’ve skittered their way into my life aren’t the faces of extreme evil. They are blips on the scale. They wouldn’t have, however, wreaked as much damage as they did had I been a little more cautious; had I been a little more conscious; a little less idealistic. Armed now with Dr. Phil’s podunk-idiom-rich advice, I’m praying that I can at least deflect other stupid fucks from getting close enough to reach me. It’s not much but it’s something.

I’m not 100% sure what my point is, really, now that I have written circles around it. It could be that I have a blog that I can write whatever I want, which today is a vulgar, profanity-filled rant about assholes who deserve to be called assholes. Or it’s that Dr. Phil isn’t as bad as he seems, maybe having a good lesson to share, seeing as his show really has helped me when I needed it. Or that I’d rather no one think I’m one of those people who sit around all day watching crappy TV and comparing it to nothing concrete because I don’t leave the house and by writing something about all of that using an occasional 50 cent word makes me feel justified in my “research” continuing. Who cares. I feel better.

Total lack of point notwithstanding, it’s time to go. Dr. Phil is airing soon and I need some ice cream and grab a nap, I mean, work.

And kids? Watch your back.